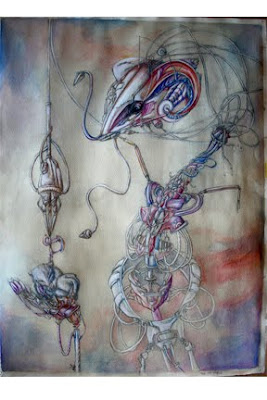 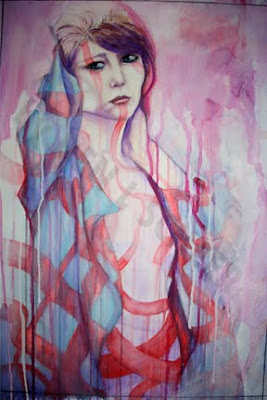 Allegory for the Modern Woman 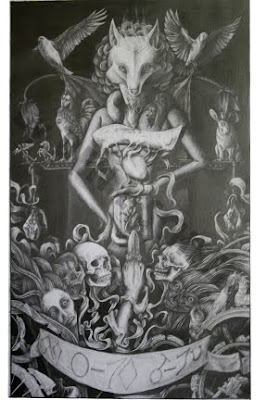 I recently finished my final piece for year 12, Allegory for the Modern Woman. It is rendered in pencil on board, approx. 58x95cm in size and uses of montage of images to show social constructs implimented upon the female gender (this being in itself a social construct). Metaphorically there are references to Snow White, Leda and the Swan, ovaries, prostitution, our obsession with weight, appearence, wealth and aging as well as the patriarchy. Being pencil and highly reflective, the photo isn't overly clear but you can still see most of the details.
Posted by Den L. Scheer at 11:20 AM 1 comment: 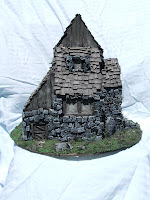 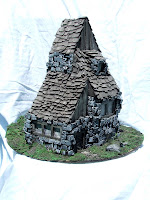 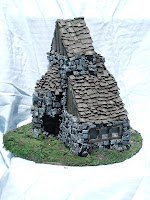 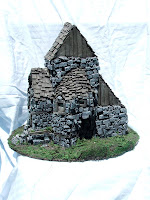 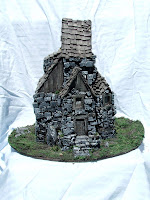 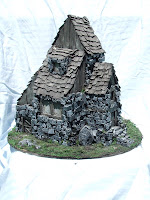 It's a polystyrene model I made way back in '07 for an art assignment. I had one of those rare freakishly amazing (in a good way) art teachers by the name of Damien McCan or McCann (can't remember how to spell his name) who was trained in special effects for movies but couldn't get a job in Western Australia. Anyway, he taught me the basics of polystyrene modelling.
This is the "Old Inn" and is 40 cm high and weighs less than a kilo. It's made of balsa wood, astro turf as grass, polystyrene and plywood as a base. Bear in mind I made it when I was 13 so it's not perfect but I love it all the same. The images are a 360 degree view of the Inn. Enjoy.
- It also got a DD (which is like a special feature) on Deviantart too. My gallery is: http://www.aizrihdhel.deviantart.com/
At the time I made the account a couple years ago I felt like having the most complicated name possible.
Posted by Den L. Scheer at 9:15 PM No comments: 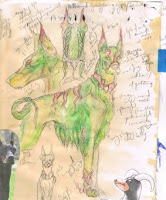 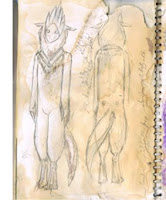 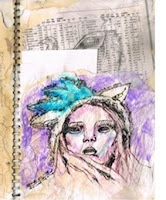 From left to right:

All images were drawn on pages from tea stained sketchbooks. 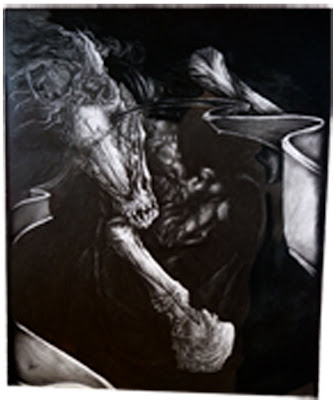 In November '09 I was flown to Melbourne for the YAAWA (Young Australian Artists and Writer's Awards). Now, because of the unwritten no-winning-the-young-australian-artist-of-the-year-twice-in-a-row rule i didn't get the overall prize. Also, because of the again unwritten nobody-can-win-more-than-category rule, I only got 1 award. The drawing above is 'Oblivion' and is, to put it simply, an undead horse rearing out at from darkness. Yes, he has reins coming from his eyes. I wanted to make his concept less cliche and more unique. I did use a reference for the tendons and ligaments of his face and legs which is the very useful Cyclopedia Anatomicae. If you can find it, I recommend that you buy it. It's basically an encyclopedia of the anatomy of different animals as the names suggests. It includes: humans, horses, sheep, dogs, cats, pigs, chimpanzees, lions, cattle, goats and even camels (to name a few).


Anyway, Ochi got the overall drawing award (sponsored by the Lions Club). I used HB, 2B, 4B and 8B pencils/graphite on a piece of squared off A2 illustration board. It's this drawing that got me the job illustrating Gary Crew's picture book but more on that as it happens. The drawing's behind glass now so this is the best image I have of him for now. Ochi is actually a rhythm (how your eye travels around an image) experiment, so he did well. He's also a character from one of my novels (yes I am a writer too). 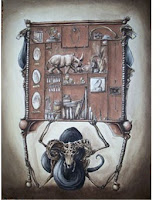 As a kind of compromise 'The Cabinet' (above) got the cover of the ASG (Australian Scholarship Group) magazine that it gives to the artists/writers attending and sends out to the schools. The Cabinet was supposed to win the overall award and was my Yr 11 final piece. Painted on A1 300gsm watercolour paper in watered down acrylic. 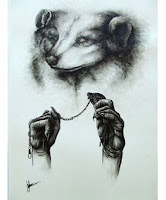 'Bludgerfawn' was supposed to win best painting. He's painted on A2 in watered down acrylic using only two colours: black and yellow oxide for his eye. Bludger has now become the character for one of my kids stories but originally was an experiment on using soft and sharp lines to give a 3D effect. if you look at him from a distance his hands look closer than his head. He IS a badger despite what people say and his hands are not chained together, he is holding a pocket watch.

Bludger wasn't included in the magazine but a print was silently auctioned for $400. On top of that, prints of both the Cabinet and Ochi were raffled and together raised about $1200. All of the prints I had donated and the money went straight to the CCN (Children's Charity Network) which are the guys who run the event.

I was sitting on a table with Marc McBride and Doug MacLeod. They are some of the funniest people I have ever met. My poor mother was left in a corner while I socialised.

The YAAWA are open to school-aged children. Google the name or go to http://www.youngatart.com.au/ for info on the art awards. there is a website for the writing portion somewhere...

How to Paint Little Red

I thought this might be good to post since some people do take interest in the sequence of painting an image. All of this was done on A2 water colour paper and watered-down acrylic. 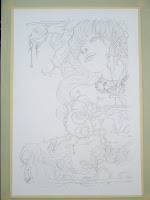 This is Red's line work. A stock reference was used for the face but the rest was made up. It was drawn directly onto the paper I painted onto. 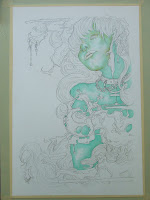 The skin was layered with washes of pthalo green and the layering of gold was started on the face. The rest of her skin was then layered with gold. 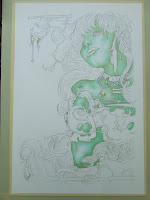 Layered red over the hair, lips, eye and limited parts of the skin. 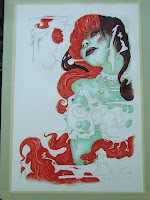 Black was layered over the areas of red and later the green. This process was repeated with the green and red for her 'clothes'. 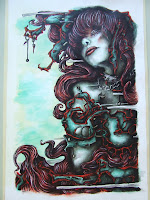 I went back and reworked the chin before washing in the background with a yellow and pthalo green. This painting process is basically how all of my paintings using watered down acrylics are done just with different colours. 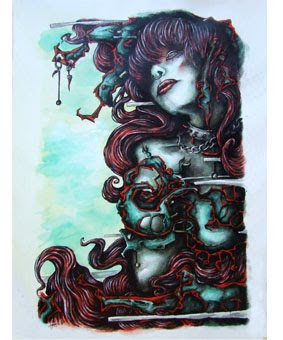 This is another experiment, although this time exploring analogous colours (opposite on the colour wheel) which in this case are green and red. She was painted sometime in mid '09 on A2 watercolour paper in watered-down acrylic and is the first face I have ever painted. Also she got a high commendation in the Shaun Tan Art Awards 2009.